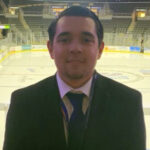 The Sioux Falls Stampede is a Tier I junior ice hockey team based in Sioux Falls, South Dakota. They are members of the Western Conference of the United States Hockey League (USHL). The Stampede play their home games at the Denny Sanford Premier Center, the largest facility in capacity and size in the USHL.

The Stampede have qualified for the Clark Cup playoffs in 13 of their 18 seasons, winning twice, most recently in the 2014–15 season. The team has won two conference championships and were awarded the Anderson Cup in 2005–06 for the highest season win percentage. For the past two consecutive seasons, the team have broken the USHL single-season attendance record, and are a four-time USHL organization of the year winner.